Today I have a third UNESCO site for you, Miguasha National Park, in Quebec, Canada. This one comes from a Postcrossing forum swap with Jason, who writes from his parents’ farm 7 hours west of Ottawa. The card is dated May 18, 2014.

This park is on the UNESCO list for its well-preserved and numerous fossils.

I’ll keep up the UNESCO theme from yesterday with today’s card, depicting the Western Caucasus region in Russia, north of the Black Sea. This card comes via a private Postcrossing forum swap with Anastasia in Russia.

This area is significant as one of the few mountain areas in Europe that hasn’t been disturbed much by humans. I think I can see from this postcard why that is – it looks very steep!

I can’t make out the postmark on this one, but I think it was sent sometime in 2013 or 2014. The sender used some neat stamps, too.

Welcome back for another installment of quarantine-cards. Today I have a card showing the UNESCO Heritage site of Willandra Lakes, in Australia.

This card comes from Elena in a private Postcrossing forum swap, and is dated June 9, 2014.

Willandra Lakes is a UNESCO site under both cultural and natural criteria. It has been a heritage site since 1981. This area is one of the oldest known sites of human occupation in Australia, with people living there as long as 40,000 years ago.

Today I have a little collection of cards my family has sent me through the years. 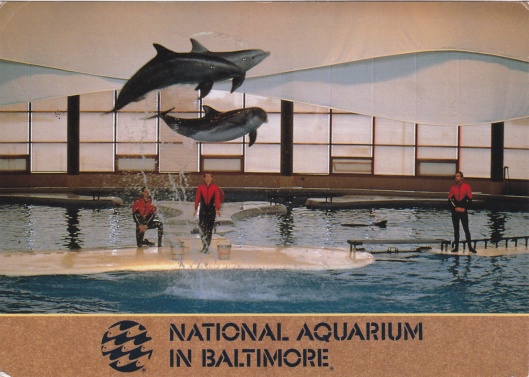 This card from the National Aquarium in Baltimore was sent to me by my sister Mandy, postmarked July 19, 1999! So almost 21 years ago. This postcard can soon have a legal drink. At that time, my sister was going to school in Baltimore, and my mom and I went to visit her around that time. I don’t really remember that visit, but she writes that we went swimming and had a good time.

Next is a card depicting the state capitol building in Harrisburg, Pennsylvania, where I grew up. My dad sent me this card in January 2013, during my senior year of college. He doesn’t write much, but I have a suspicion that I had bought this card while I was visiting home for winter break, and asked him to send it back to me when I was in school, because the address is written in my handwriting, and I paired it with one of the Pennsylvania stamps from the USPS’s series of state stamps. 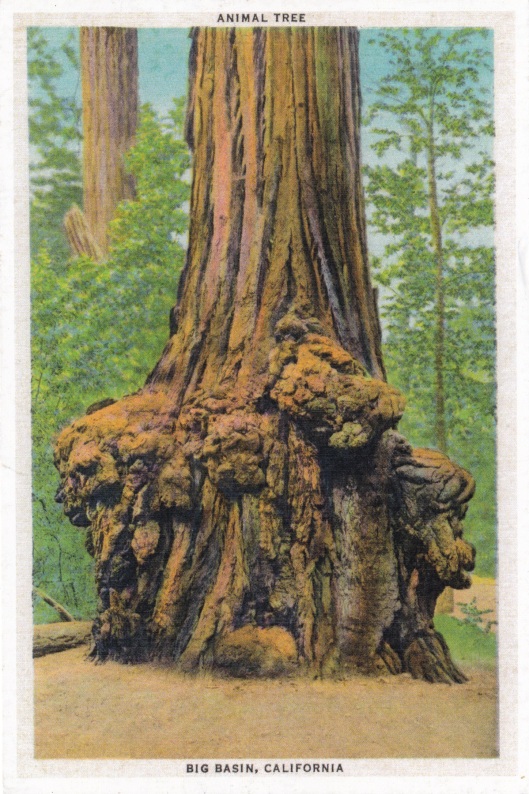 Finally, a card from Big Basin, California, which doesn’t have a date on it. My now-spouse brought this back for me from a trip he took in the summer of 2012. He writes that Big Basin has a lot of great trees, and many postcards of the trees, but chose this particular card because it was one of the few that didn’t use the font Papyrus.

Hope you are all staying as connected to your loved ones as you can in the current situation.

I have two new UNESCO sites, one from Ireland and one from Northern Ireland, both from Postcrossing forum member cursus_honorum.

Skellig Michael is one of the Skellig Islands in the Atlantic Ocean and has been a UNESCO site since 1996. It is notable as the site of an early Christian monastery, founded sometime between the 6th and 8th centuries CE. The island remained occupied until the 12th century CE. The monastery is perched on the top of the island, which rises 714 feet (218 meters) out of the ocean. Shown here are the beehive shaped cells that were part of the monastery.

The second card shows the Giant’s Causeway, part of the northeast coast of Northern Ireland. The coast is formed of about 40,000 columns of basalt rock, the result of an ancient volcanic eruption. Most of the columns are hexagonal, but some have more than six sides. The tallest columns are 39 feet (12 meters) tall. The Giant’s Causeway has been on the UNESCO list since 1986.

cursus_honorum sent both of these cards written and stamped, so I have two new Irish stamps to show you:

On the left is a Europe stamp from 2013 showing a postal worker and his van. On the right is a stamp from 2014 showing a stained glass depiction of St. Patrick, one of the patron saints of Ireland.

Mount Fuji was one of the latest UNESCO World Heritage List inductions, being added to the list last year in 2013. But it was only recently that I received a card of this Japanese landmark: 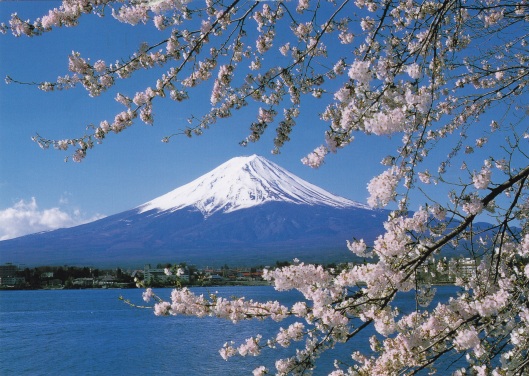 This first card shows a snow-capped Mount Fuji framed by ornamental cherry blossoms in spring. This card comes from Wakka in Fukushima. The back of the postcard saws that the view is looking across Kawaguchiko Lake.

This second card shows Mount Fuji and Lake Motosuko. This card comes from Nana in Nagasaki.

Nana sent me an envelope full of nice cards, including another UNESCO site, Kiyomizu Temple, one of the Historic Monuments of Ancient Kyoto.

And finally, the stamps:

Thanks, Nana and Wakka!

This card shows the rock formation called the “Artist’s Palette” which is very colorful. The colors of the rock are caused by various metals and minerals that can be found there.

This second card shows the Death Valley “sailing stones,” stones that move across the dry lakebed of Racetrack Playa, leaving trails that can be several hundred feet long. No one is sure why the rocks move, but it seems to be a combination soil conditions that reduce friction and very strong winds that push the rocks across the ground.

This second card was sent by a Postcrossing user in Germany. The sender included this stamp of Ludwig Leichhardt, a 19th century Prussian explorer and naturalist.

Many thanks to Tigerin81 and the German Postcrosser!

This card of Carlsbad Caverns rounds out my New Mexican UNESCO collection. There are a lot of World Heritage Sites there!

This card comes from Elena:

It shows the sand dunes in Death Valley, California, which is a National Park. It is very, very hot and dry there.

That’s all for now!

Here are four scenes from the Netherlands, sent to me by three different Dutch Postcrossing forum members.

First is this card of buildings in the Hague, from Pieta: 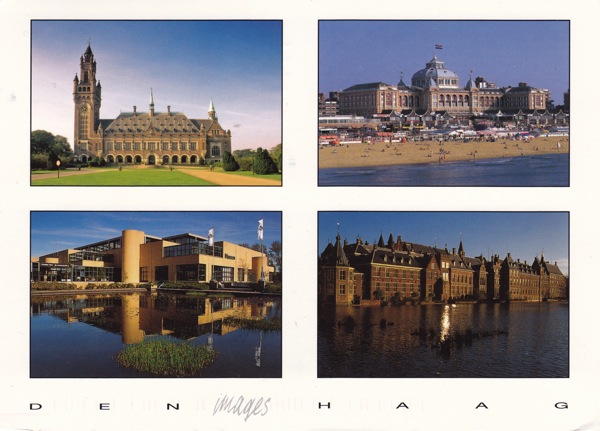 The Hague is the capital of the South Holland province and is the seat of Dutch government. The buildings shown on this card are (clockwise from top left) the Peace Palace, Kurhaus, the Museon (a science museum), and the Parliament buildings. 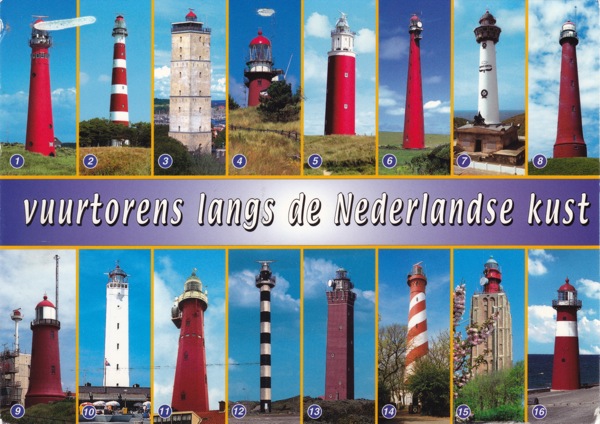 I’m not going to list all the lighthouses here, but they are all listed on the back of the card, which left very little space for Pieta to write a message.

Next is this card of Amsterdam’s famous canals, which are listed on the UNESCO World Heritage list:

This card comes from Eleonora. The canals in Amsterdam were dug in the 17th century and form concentric rings around the city. They provide an easy way for goods and people to move about the city.

The last card shows the Kinderdijk windmills, which I’ve written about before. This card was sent by Peggy.

The Netherlands has lots of great stamps, and many of them arrived on these cards: 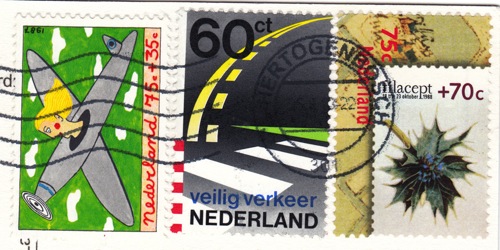 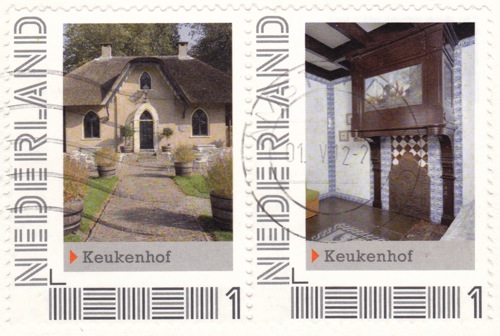 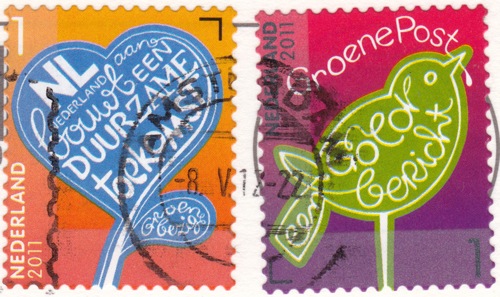 I have two new cards from one of the newest UNESCO sites, the Bali rice terraces and subak irrigation system, listed last year. And as a bonus, I also have the UNESCO-nominated Besakih Temple, also in Bali!

The subak system of irrigation and rice growing is based on the Tri Hita Karana philosophy which “brings together the realms of the spirit, the human world, and nature.” The water temples are spiritual centers and also centers for control of the life- and rice-giving water in the irrigation canals. The subak system is “democratic and egalitarian,” allowing the Balinese to grow enough rice to feed their dense population.

This card of the Balinese rice terraces comes from Jennifer:

And finally, there is the extra card of the Besakih Temple, which has been nominated for UNESCO status but not yet listed:

This Hindu temple is the largest and most famous temple in Bali. It is built on the slopes of Mount Agung, an active volcano. It was nearly destroyed by the eruption of the volcano in 1963, but the lava flow missed the temple by mere meters, which was viewed as miraculous.

I was delighted by the many colorful and interesting stamps that Shinta and Jennifer used on these cards:

Thanks Shinta and Jennifer!