Today is July 14, which is Bastille Day in France. I don’t have any cards about the French Revolution, but I do have some nice French UNESCO cards to share: 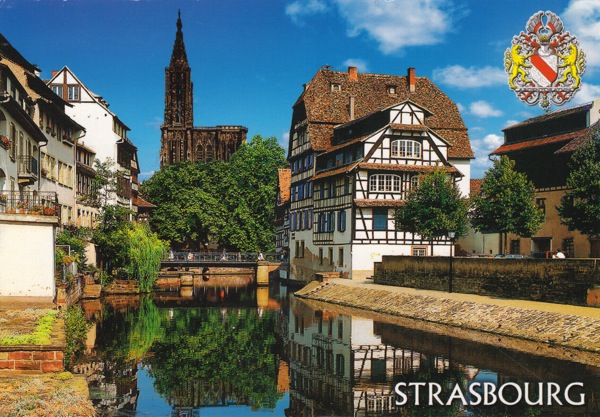 Here is a card of Strasbourg from Marie. Strasbourg is a town in eastern France, near the border with Germany. On the card you can see “Petite France” and the cathedral. Petite France is known for its half-timbered houses. In the medieval period it was home to slaughterhouses and tanning houses. It was put on the UNESCO list in 1988.

The second card is from a Postcrosser in Germany. It shows Chartres Cathedral. It was constructed between 1194 and 1250 in the French Gothic style. The cathedral is illuminated in many colors at night. The Cathedral has been on the UNESCO list since 1979.

This one shows an Edgar Degas painting.

This stamp is from Germany and is from a series of stamps “for the children.”

Pazzolina has expanded my UNESCO collection with two cards from France:

First is this wonderful panorama of the Chateau d’Amboise, part of the historic Loire Valley cultural heritage site. The chateau was confiscated and rebuilt extensively by the French monarch in the 15th century. It was a favorite residence of the French kings. Catherine de Medici and Henry II raised their children in the castle, and Mary, Queen of Scots was also raised here. Leonardo da Vinci is buried in the chateau’s chapel. It fell out of favor after the 16th century and was briefly a prison before being mostly destroyed during the French Revolution.

The second card shows a gate to the medieval town of Provins, inscribed for its role as the site of Champagne fairs, important for medieval trade. These fairs served as an important market for spices, furs, textiles, and leather. 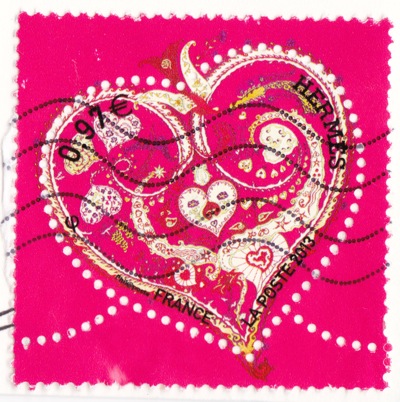 I have received many Nouvelles Images multiples cards recently. The assortment of things on the cards are so colorful and fun! 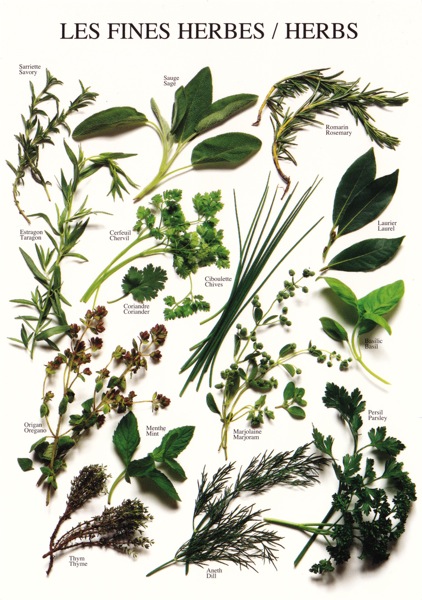 This card showing types of herbs comes from Paivi in Finland. There are some good herbs on here, but it is missing my favorite: basil! 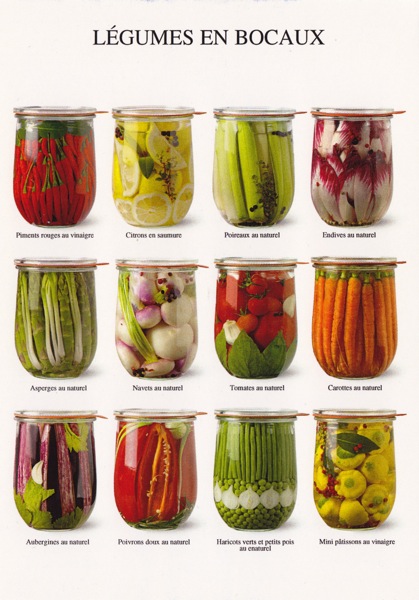 Pazzolina in France sends this card, showing many types of preserved vegetables. I started canning things this summer, but my jars are not so pretty, and neither are the things in them. Still tasty, though.

Eleanora in the Netherlands sends this card of citrus fruits. 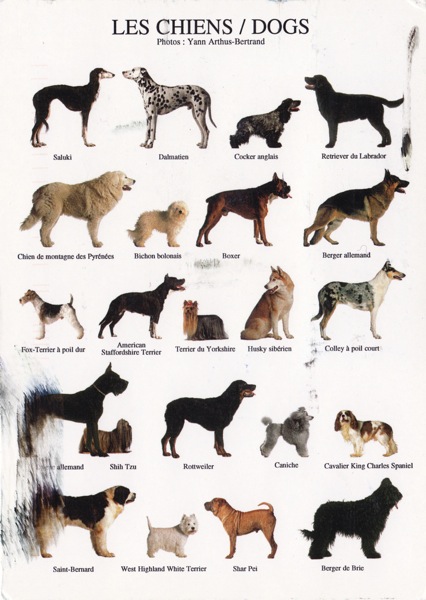 I have three more sites to round out the showcase of French UNESCO sites today. They are the Abbey of la Madaleine in Vezelay, the Place Stanislas in Nancy, and Lyon Cathedral in Lyon.

First, the Abbey in Vezelay, which comes from Veronique:

The Abbey was built in the 11th century. It was expanded several times in the Middle Ages to accommodate all the pilgrims who came here to see the supposed relics of Mary Magdalene. The flying buttresses that you can see in the lower left photograph were added during restorations between 1840 and 1861, when the abbey was in danger of collapse. The Abbey has been on the UNESCO list since 1979.

Next on the list is the Place Stanislas in Nancy, sent by Marie:

The top left picture shows the Hotel de Ville, or city hall, the largest building on the square. I believe the bottom left picture shows the Palais du Gouverneur and the right-side picture shows the triumphal arch in the south of the square. The square was designed to integrate the old medieval part of the town with the new part of the town built in the 17th century. The square was named after Stanislas Leszczynski of Poland, who was Louis XV’s father-in-law and Duke of Lorraine. The statue in the center is a statue of Stanislas.

Finally, there is the cathedral in Lyon, sent by a young Postcrosser:

This is the Cathedral of Saint John the Baptist, one of many buildings that make up the Historic Site of Lyon. The Cathedral was built between 1160 and 1481. Lyon was added to the World Heritage list in 1998.

That sums up my French UNESCO sites for now, although I still have many more to collect!

Another day, another UNESCO site from France. Today I have the Cathedral of Notre Dame de Reims, located in the Champagne region of France. It has been a UNESCO site since 1991.

Thanks for Veronique for another lovely UNESCO card.

The UNESCO listing for the Belfries of Belgium and France includes 56 historical buildings spread through Belgium and Northern France. Obviously, this is a lot of buildings, and I only have a postcard showing four of these belfries, but it is a start. Many of the belfries on the list were civic belfries or those attached to city halls, but some are religious belfries that also served as watchtowers and alarm bell towers.

Veronique sent this card showing four belfries from her region of Nord-Pas-de-Calais:

Veronique used a stamp showing another belfry, though I don’t think this is one of the UNESCO belfries: 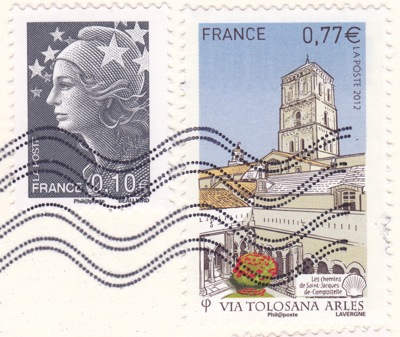 This stamp commemorates the via Tolosana, which becomes the Arles Way in France, which is one of many, many parts of the St. James Way, the pilgrimage route through Europe that eventually leads to the Cathedral of Santiago de Compostela in Spain. The Cathedral and parts of the route are also designated as UNESCO cultural sites.

Tomorrow we’ll continue the UNESCO fun with the cathedral in Reims.

I’m back with more UNESCO sites! This time, I have a series of cards from France. The first is Mont St. Michel, or St. Michael’s Mont, in Normandy, France. I picked this card to show first because Mont St Michel is one of the few UNESCO sites that I have been to. It really is a spectacular place: 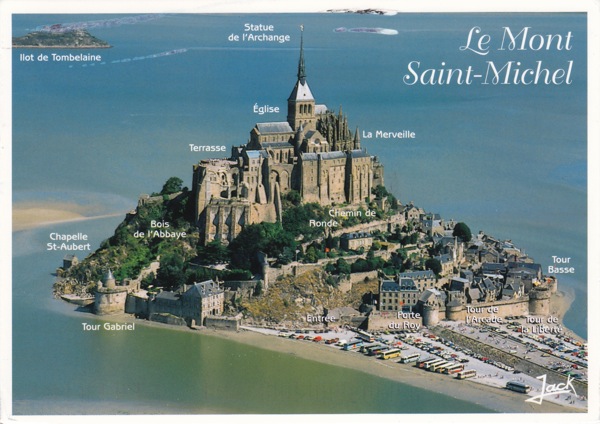 As you can see, Mont St Michel was built on an island in the 8th century CE. It used to be connected to the mainland by a tidal causeway, which was revealed at low tide, but covered at high tide. In 1879, a permanent causeway was built, connecting the island to the mainland at all times. The island, its abbey, and the surrounding bay have been on the UNESCO World Heritage list since 1979.

Interestingly, there is another St Michael’s Mount across the Channel, off the coast of Cornwall, England. This island, which was built to look like the one in France, was given to the Norman monastery in the 11th century as a gift for supporting William the Conqueror’s claim to the throne of England.

Only 44 people live on Mont St Michel, but more than 3 million people visit every year, making it quite the busy island.

Mont St Michel reminds me of a fantastic sand castle because of the way it sits far out on the beach, sometimes surrounded by the waters. It really sparks my imagination to think that there really are towns and fortifications built up on the beach, rising out of the sand like a sandcastle, but they are big enough for people to actually live and work in.

This card was sent by Erin in Normandy, who used a very neat circular stamp showing a woman lifting weights:

I like stamps that are different than the typical square or rectangular shape. Tomorrow, we’ll take a look at the Belfries of Northern France.

I love animals, so of course I love animals on postcards. Here are a handful of animal-centric cards I’ve received recently.

First there was this wonderful card from a Postcrosser in France. It shows some beautiful horses in Brittany! I used to ride horses when I was a child. I should get in better shape so that I can take it up again, because I love riding and I love being around gorgeous horses! But riding can be really hard on the hips, and I’m not as flexible as I used to be (which is sad, it’s not as though I’m ancient!) 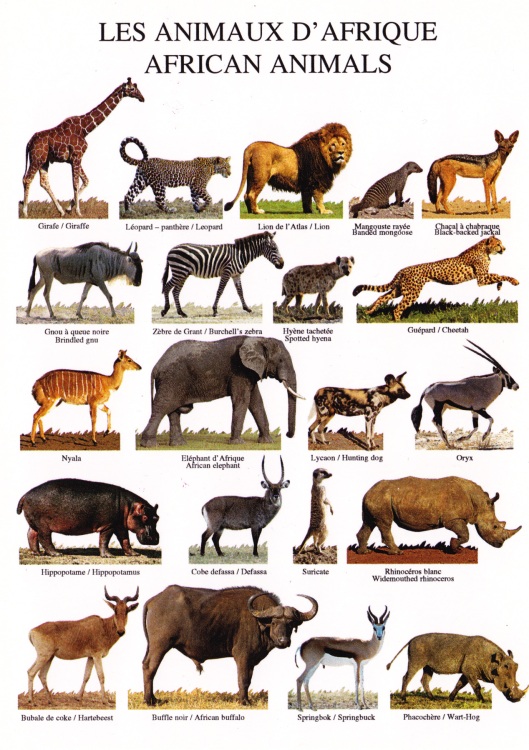 Here’s a real parade of animals, from Carolien in the Netherlands. This is probably one of my favorite Nouvelles cards (but how can I choose, they’re all so pretty!) It could only be beat by a multiples card that had all elephants.

Finally there is this panda trekking through the snow from nibazuodejia in China. As nibazuodejia notes on the card, pandas eat almost exclusively bamboo, even though they are a member of the order Carnivora, like all bears. I’m glad to have a panda card that doesn’t emphasize how cute and cuddly they are, since they are real animals and not teddy bears. Also, the stamps on this card are amazing:

Some beautiful landscapes, with some animals in there, too. Well, this wraps up the animal parade for the morning, but I’m coming back in the evening with some penguins.

Two UNESCO sites for today, one from Israel and one from France.

This card of Jerusalem shows the Church of the Holy Sepulchre, which is believed to be the site upon which Christ was buried (hence the name, sepulchre). Many other buildings of great religious significance are located in Jerusalem, such as the Dome of the Rock; the blending of three religious and cultural heritages is the reason for its UNESCO inscription. This card comes from whiterose.

The stamp has nothing to do UNESCO World Heritage, but I love it: 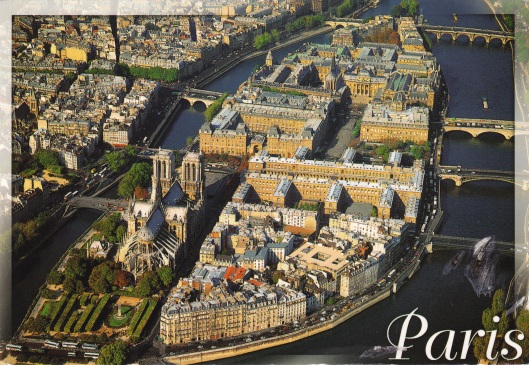 Beautiful Paris, and the famous Notre Dame Cathedral. This card comes from vykortsfantast, who has been very helpful with my UNESCO collection. I believe this is the third card she has sent. The Cathedral is located on an island in the River Seine. The UNESCO site encompasses a large area along the banks of this lovely river in this historic city.

I don’t know what that brings me up to now, in terms of how many UNESCO cards I have. I will have to do a full count and find out! Do you collect UNESCO cards? How many do you have?

Two new places for my European World Heritage list, both in France:

The card of the Pont du Gard comes from vykortsfantast. The Pont du Gard is a Roman aqueduct built during the reign of Agrippa, and was made a UNESCO site in 1985. It was built to carry water across a river, which seems a little silly when I think about it. It’s a bridge to carry water over water. 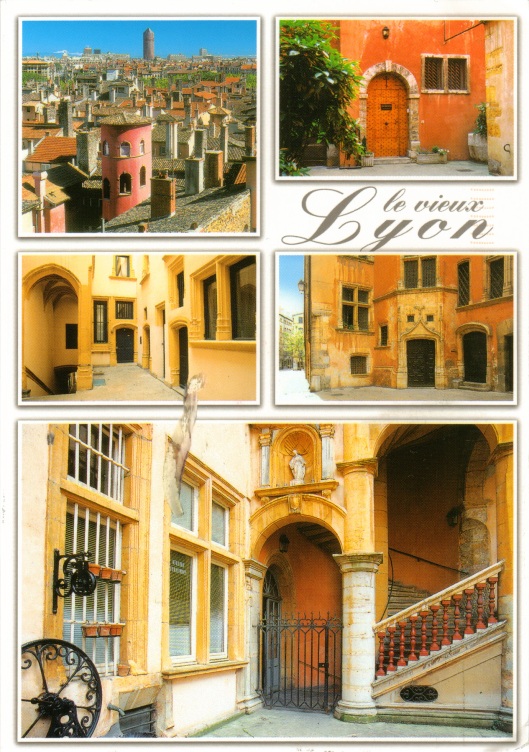 The second card comes from Jean Michel via Walltype and shows the buildings of Lyons. This town was founded by the Romans (who were a very busy civilization) and inscribed on the UNESCO list in 1998. It is hard to say what specific buildings are represented here because the back of the card only invites us to “discover the treasures of old Lyons” but I believe that the upper left picture shows the “House of Crible/ Rose Tower” in the foreground. If you can identify the sites, please let me know in the comments!