Kathryn from Australia sent me a great card of the colorful kookaburra: 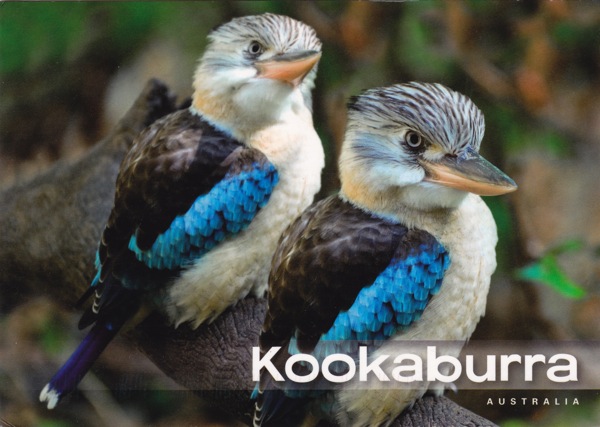 Kookaburras are kingfishers native to Australia and New Guinea. They are known for their distinctive call, which sounds like laughter. Kathryn writes that she used to hear the kookaburras often when she went camping as a child. That sounds really neat! Thanks, Kathryn!s

After a too-long hiatus, I am back with plenty of postcards to share. I have graduated college and have nothing to do until I start law school in about a month. Since graduating, I have adopted a little dog named Colin, so today’s post will feature a card with a dog:

My dog Colin is not a husky, he is a miniature poodle, but if you put food in front of him he would probably pull a sled very, very well. He also alerts us to all kinds of threats: passing dogs, birds, and light breezes.

Penguins from Australia, via Postcrossing. This Little Penguin (Eudyptula minor) is the smallest of all penguins and is only found in the waters around South Australia.

These penguins are Humboldt penguins (Spheniscus humboldti). They are medium-sized penguins, native to South America, although these penguins live much farther north in Austria, at the Vienna Zoo at Schonbrunn.

I hope these waddly little birds gave you a smile today.

I’ve been receiving a lot of postcards from Australia recently, especially through Postcrossing. I can’t complain, since there are many interesting things there to see!

I have three new Australian UNESCO sites to add to my collection: 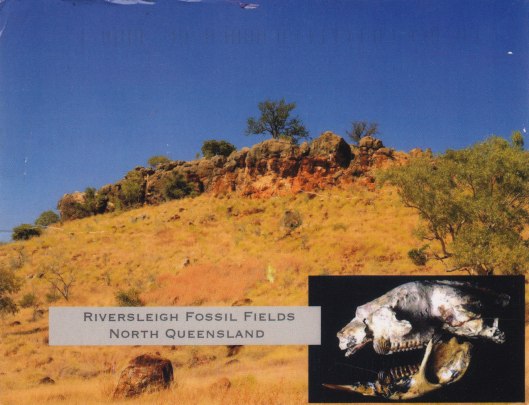 The first card comes from Artefaque via the official Postcrossing site. It shows a rarer UNESCO site, the Riversleigh Fossil Fields, which is one of the Australian Fossil Mammal sites. It is a rich source of archeological information about the evolution of mammals in Australia. Artefaque also used from wonderful stamps from the 2000 Olympics:

The next card comes from SL Liew in Malaysia, but shows the Shark Bay UNESCO site. The card shows the stromatolites that the site is famous for. The stromatolites are formed by microogranisms like blue-green algae. Stromatolites are some of the oldest preserved evidence of life on Earth, dating back more than 3.5 billion years.

That’s all for the UNESCO from Australia, but come back soon for more UNESCO sites from around the world.

Cows are very ordinary animals, but they are still one of my favorite animals. Like yesterday, I have two cards from Australia and the Netherlands to share, but this time they show cows instead of pointy animals:

At first I thought this card showed some European bison, but I think it is actually a pair of very furry cows. The card comes from the Netherlands, but the bisons’ range is much farther east in Europe. This card came from Amanda back in the spring.

Here is a recent cow that comes from Australia via Postcrossing. It is one of a series of maxicards depicting farming in Australia. I was very surprised to see this card in my mailbox, because the night before I received it, I had been considering a swap for the very same card on the Postcrossing forum! At first I thought that the mail had suddenly become much faster! But it was sent by a different person.

That’s all for the cows! Come back tomorrow for more postcards. 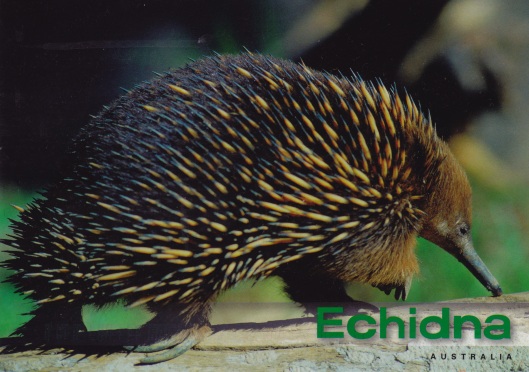 This is an echidna from Australia. This card was sent by Kathryn in Tasmania. Echidnas belong to a group called monotremes- they are mammals that lay eggs. Echidnas are related to platypuses. They are good at burrowing, eat small insects, and use their spines for defense. This short-beaked echidna is the most common native Australian animal. There are also three kinds of long-beaked echidnas that are native to New Guinea.

Kathryn used a stamp of another great Southern hemisphere animal, the penguin:

The second spiky animal I have comes from Wesley in the Netherlands. Wesley sent me this card of an adorable hedgehog! 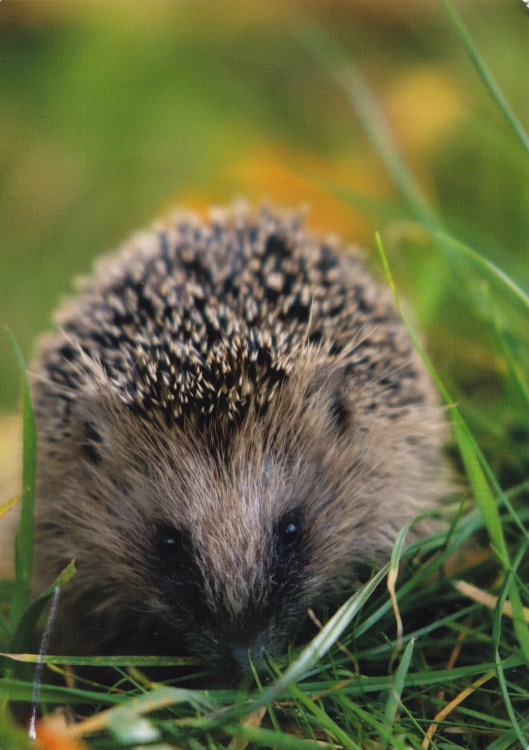 Hedgehogs are also common animals and they also eat insects and use their spines for defense. People like to have them in their gardens because they eat the insects. Wesley writes that the hedgehogs he has seen do not seem afraid of humans, but he leaves them alone just in case. They can’t detach their spines like porcupines do, but it does seem better to be safe than to be poked by a hedgehog. We can admire their cuteness from afar, anyway!

Here are some funny videos with “true facts” about echidnas and hedgehogs. They aren’t really true, although echidna babies really are called puggles and hedgehogs really do get tubes stuck on their head a lot:

Here are the stamps from the many Australian cards I featured this morning.

There’s such a great variety of stamps here! I really appreciate how Aussie_bear sent each of her cards individually, since the postal rates in Australia are so high. But now we can enjoy these lovely stamps and cards.

This post on cards from Australia is so big, I’m dividing it into two posts. Here are the cards, and this afternoon there will be the stamps. All these cards come from the super-kind Aussie_bear from the Postcrossing forum. She’s certainly helped extremely with my Australian UNESCO collection! 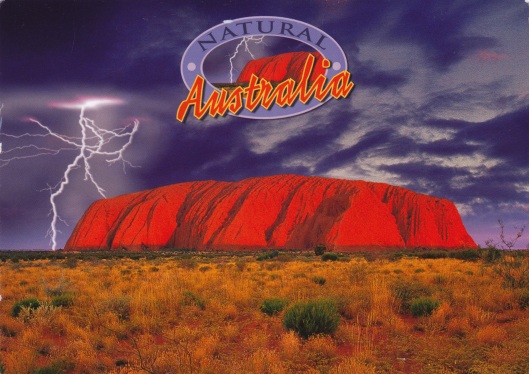 Here we have one of Australia’s most famous natural landmarks, Uluru or Ayers Rock. I grew up learning that it was called Ayers Rock, but the aboriginal people call it Uluru. Now, both names are acceptable and used together.

And here’s one of Australia’s most famous man-made landmarks, the Sydney Opera House. The ship sailing past is the Bounty, I assume a reconstruction of the famous HMS Bounty, which explored the waters around Australia in the 18th century.

And here’s another reef, Nigaloo reef in Western Australia. I love the turtle! 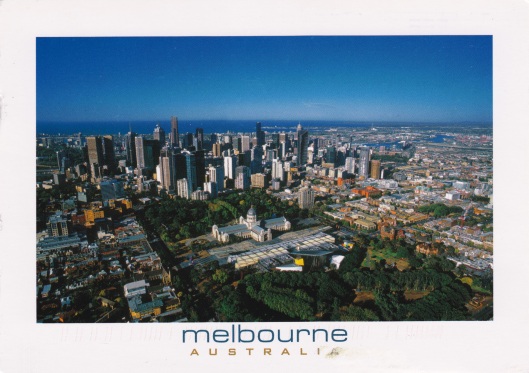 This aerial view of Melbourne shows the Royal Exhibition buildings and Carlton Gardens.

Finally there’s this card of the Lord Howe Islands. This one shows a view across a lagoon toward Mt Eliza.

Whew! That’s quite a little pile of great cards! Come back later for the stamps!

I received two postcards showing Cockatoo Island, Australia, just a few days apart from each other. 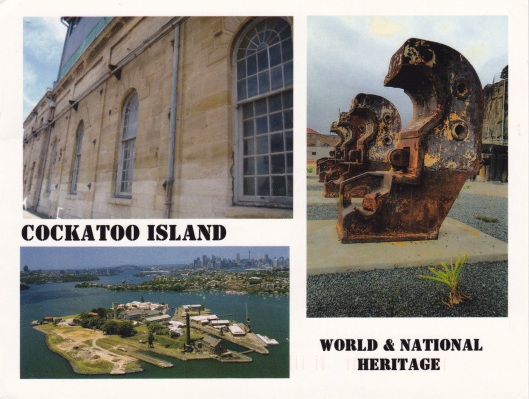 First came this card from scubaduba. 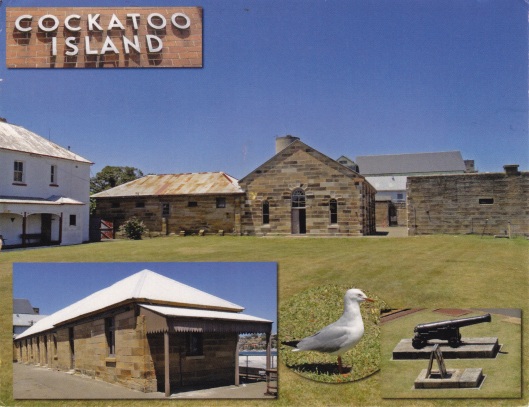 Then came the second one from aussiebear. I like how with the two cards, you get a good view of the island and the buildings. Cockatoo Island is one of the 11 sites listed under the Australian Convict Sites UNESCO listing. It was a penal colony from 1839 to 1869. It’s located in Sydney Harbor, not far from 3 of the other sites. Hopefully I will collect all 11 someday.

The senders both used some great stamps, too:

I’m so sad that this one got ripped!

This last stamp is very appropriate for the card with Cockatoo Island, since, in addition to being a prison, it is the location of Australia’s first dry dock and it was an important dockyard.

In case you’re lacking a spring in your step this Monday, here are some bouncy cards to get you going!

This creepy rabbit comes from Matthew via sendsomething.net. It’s an art piece that was featured at the Screaming Sky Gallery in Portland, OR. Matthew writes “hop hop hop hop hop hop… hop” And there’s a “matching” stamp:

It’s Bugs Bunny! I remember when these stamps came out. I was six, and I loved them and bought a sheet to keep. I probably still have those stamps somewhere. 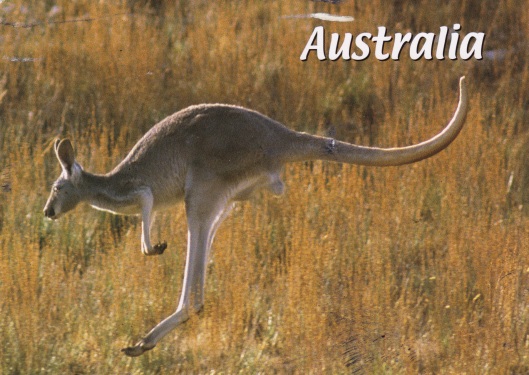 This other kind of bouncy animal comes from Jemma in Australia. I had several cards from Australia, but not one that shows a kangaroo! I’ve only seen kangaroos in zoos, so I’ve not had a chance to see them bounce around very much.